Well, unless you’ve been living under a rock these past few days, you’ve probably heard about the flood in Calgary. The last few days have just been completely crazy, with coverage of the floods before they reached Calgary and then having to relocate to higher ground once our station got evacuated.

We were able to get space at SAIT, a local college located up on a big hill in the north of the city. It’s been about 50 of us, all crammed in little lecture rooms and writing show lineups on the back of whatever pamphlets we could find. I went on a hunt for paper with another producer and while the guy in the library didn’t have any, he must have gone on a hunt because he came back to where we were broadcasting on the other side of campus about 30 mins later with big fat pads of legal paper, which was a HUGE help. Since all of our contacts and rolodexes were still at the studio, we really had to fly by the seat of our pants to put together a four hour show focused exclusively on flood coverage. But luckily, my colleagues are absolutely incredible, creative and passionate people. We managed to put the show on without any dead air, hooking our cellphones up to a wire that fed to our hosts’ earbuds.

See that weird looking antennae beside the window? That’s our connection to Toronto.

It felt really weird to be back in a classroom, with students just down the hall, and not actually be a student. It’s been just over a year since graduation and it’s definitely been a crazy year.

I was a bit concerned about whether I would even be able to get to the temporary location. I live downtown, which was placed under an evacuation order, and is on the south side of the Bow river. Since some of the bridges were closed, I didn’t know if I’d be able to leave the core but luckily, the 10th Street Bridge was open and I was able to snap some pictures while crossing the river.

That’s Poppy Plaza. It was only just opened as a veterans’ memorial about two weeks ago. Below is an artist’s rendering of what it normally looks like.

Below, that spire is normally up on a bank above the river, beside trails that I run along. They’re completely flooded. 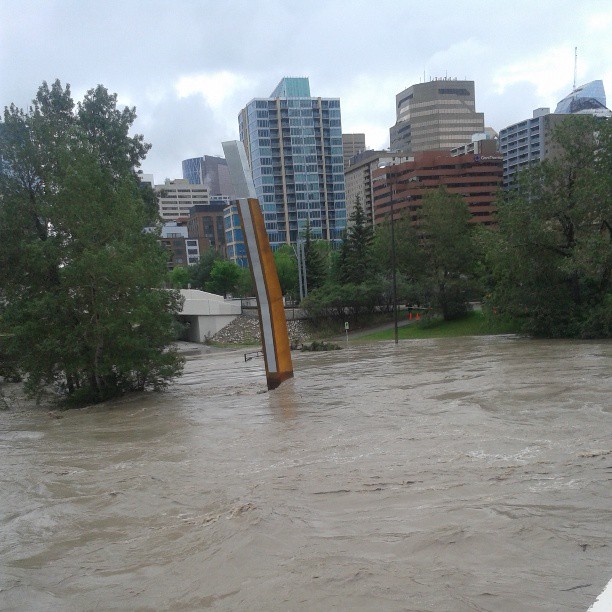 And of course, what would a flood be without ridiculous people risking their own safety and that of first responders in order to get the perfect picture? This doesn’t capture the speed of the water at the time, but it is GUSHING.

The downtown core where I live is normally super bustling. Even at four in the morning, there are still cars everywhere on the street. This is normally a very busy intersection but because of the evac order and the power outage, the lights aren’t working and there is no one here. Walking home last night, it felt very much like what you see of zombie apocalypses in the movies – the eerily quiet streets, the street walking signal ticking to no one. I saw maybe three people on the streets on my walk home, which was about six blocks. It’s very disconcerting.

Again, normally about a dozen cars parked outside this busy government building.

It rose so quickly overnight from what I saw Thursday evening on my walk home. Then, the water was still lapping at the pathways and was raging, but not bursting its banks downtown as much as it is now.

Below is a good measurement of how the water rose between 7pm Thursday night and 9am Friday morning. I took this one from an underpass above the river. See that little pathway winding up towards the city at the left of the below picture? That’s where I was standing in the earlier picture with police tape and people taking pictures. The water has already reached the top of the gate closed on the pathway. That’s at least a seven foot increase overnight.

Taken Thursday around 7. This sign was submerged by Friday morning. 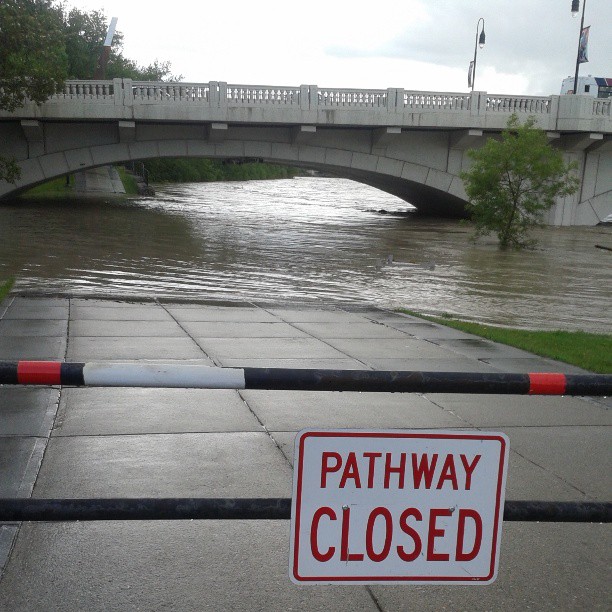 So now, all we can do is wait. Most of downtown is facing a massive power outage but I somehow still have power and thought I would post this before it goes out. The great thing about Calgary is that even yesterday morning, there were already thousands of people organized in Facebook ‘Clean Up Calgary’ events. Police tweeted Thursday evening that they were overwhelmed with people calling and asking how they could help, how they could volunteer. Kijiji is flooded (no pun intended) with ads of people offering a place to stay for those who have been displaced. Food trucks have been going around donating food and feeding people at emergency command centres and evac centres. And it happened almost instantaneously. Before the river even crested, people were offering to help. Now, Mayor Nenshi is saying we could be without power for days. Luckily, as long as phones are charged, people will still be able to organize volunteer efforts. As for CBC, no word yet on when we’ll be allowed back at the station. For now, we’re still broadcasting from SAIT.